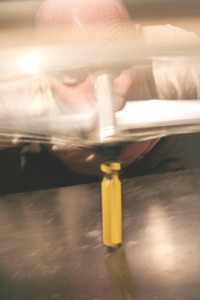 Stefano Di Renzo was born in Italy where he studied Engineering. After finishing university, he moved to Spain to train circus skills, theatre and dance at Municipal School of Circus Alcorcon (EMCA) in Madrid. Then he moved to London where he graduated at The Circus Space in London.
After completing the degree he and Ruben Garcia Rio co-founded theatre-circus company Compañia LA. Hambre is Compañia LA’s first piece and has toured internationally since 2006.
His first solo show On My Way premiered at Festival Mirabilia (Italy) in 2012 and has been touring ever since. Hold on is his second solo show and tours outdoor festivals in Europe from summer 2015.
Stefano works towards a dynamic fusion between circus and physical language, examining potential meanings and story through equilibristic, object manipulation and corporal movement.
Alongside developing his own work, Stefano has worked with international physical theatre and circus companies, such as Ockham’s Razor, Theatre Rites, Company F.Z, The Generating Company and Oily Cart.